The Birth of Progressive Radio, and my little piece of it 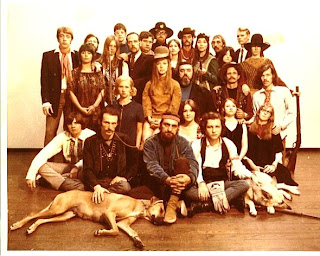 Back in 1967, radio station KMPX-FM in San Francisco, under the direction of the legendary Tom Donahue, became what many consider to be the first "underground" or "progressive" station, playing album cuts rather than hits and being programmed exclusively by the DJs rather than some overall station plan.

I was 10 years old back then, and my family and I lived in , just south of SF on the coast. My dad was a bit of a stereophile, and one day he announced that he had found this incredible new station that was playing cool music. On a Saturday evening, he pulled out the big unwieldy reel-to-reel tape recorder, put the microphone in front of the speaker, told us all to shut up, and recorded two hours of KMPX.

What a great collection of stuff! Imagine a radio station today playing the following songs:


along with traffic reports ("be sure to turn on your lights -- the freeway is a fright") and discussion of the previous night's Shankar concert.

That damn tape was my dad's "party tape" for years. I thought we had lost it long ago, but I recently found the first hour and made an MP3 of it. You can listen to it by clicking here, or downloading it by right-clicking and saving.
Listening to it, I got a little obsessed with it. It really is a piece of history, recorded at the very moment when radio, and most of society, was poised to head off in many weird directions. So, lacking any other hobbies, I decided to research it.
First, some background. KMPX was the brainchild of Tom Donahue, the top boss jock at Top-40 giant KYA in the early 60s. When the counterculture started to hit in the mid-60s, Tom noticed that the music that he and his friends listened to while cross-legged on the papa-sans (well, his friends – Tom was an extra-large) wasn’t the music they were being told to play on the radio. So in early 1967, Tom did the simple exercise of getting out the Yellow Pages, turning to the “Ks,” and calling FM radio stations in alphabetical order to see if one was interested in playing good music. (Contemporary music on the FM band was pretty new. FM had been around since the 40s, but nobody ever used it or listened to it. Our family didn’t even own an FM receiver until 1966, and I didn’t have one in my car until 1978.)
KMPX, at 106.9 on the FM dial, was a struggling foreign language station that provided programming for the large Portuguese and Italian fishing population in . (Most people don’t think of SF as an ethnic, blue-collar kind of place, but until fairly recently, it was – remember, Joe DiMaggio was a fisherman’s son from .) Actually, Tom never got KMPX on the phone – the station was so struggling, the phone had been disconnected. The owner, figuring what the hell, agreed to let Tom have a chunk of time from to to try out his idea. (And let's give credit here - starting two months before Tom, an innovative DJ named Larry Miller had already been doing a progressive show on KMPX from midnight to 6AM. Tom expanded the idea, but Larry was there first.)
My first question to research was the date of the recording. The DJ gives a few clues:

He mentions that the foreign language shows were being phased out. According to some articles I ran across on the web, all the foreign shows were eliminated by August, so the tape must fall between then and the format’s premiere in April.

I figured the traffic reference must refer to the Memorial Day weekend (remember those damn Memorial Day traffic body counts?), and I browsed around at some vintage concert poster sites until I found the Shankar concert. The tape was made between and on .

What to say about the music? In addition to the above songs, the hour also included a bluesy version of “The Twelfth of Never” by an unknown artist, an unknown piece by jazzman Jonah Jones, a Guaraldi-like version of “A Hard Day’s Night,” “Uskudar” by Herbie Mann, “Another Girl” by the Beatles, “Egyptian Garden” by Kaleidoscope, and (an especially cool find) “Miserlou” by the Devil’s Anvil, a kick-ass proto-punk band from the Middle East. Counting the first bar of “River Deep Mountain High” by Tina Turner that ends the tape, that’s 19 songs in 57 minutes, an astounding amount of music. Of course, there are no commercials , despite the fact the KMPX was definitely a commercial station. Still don’t know what the story is there. But it's also obvious that there was a huge Middle Eastern influence at work here. Everybody was doing it - the Rolling Stones' "Paint It Black," the Hollies' "Stop Stop Stop" and many others. I've never seen any kind of study on this.

The only thing that still bugs me about the tape is the name of the DJ. I think that was my dad's favorite part of the tape, actually, because he thought the guy sounded like Pat Paulsen. I distinctly remember that in the now-lost second hour of the tape, he said his name was Vince Something-or-other, but I can't find any record of a Vince at KMPX.

But I did find the above photo - the staff of KMPX, circa 1967. Take a close look at these folks. (People tend to forget that a big part of hippie culture in '67 revolved around Wild West garb and big frigging guns.) First off, that’s Howard Hesseman – yes, that Howard Hesseman, the legendary Dr. Johnny Fever from WKRP in Cincinnati, the coolest sitcom ever - in the natty ascot upper left (next to his wife). Tom Donahue is seated in the middle, with his child bride Rachael (she was 18 at the time) in the derby and sitting in his lap. (Rachael is currently the director of the oldies broadcasts emanating from the Rock and Roll Hall of Fame in , and is one of the DJs at Sirius.) Also, the blonde three over from Howard is Dusty Street, currently also with Sirius, and three over from her is Carl Gottlieb (DJ name "Egg"), who later gained fame by taking Peter Benchley's shitty shark novel and writing the script for "Jaws." (He played the newspaper editor in the movie.) Lary Miller is the gnome-like fellow with the Prince Valiant haircut in the right rear, next to an arch-looking blond salesman in a coat and tie who just happened to wander into the picture. And I'd love to know who the psychotic looking blonde next to Rachael is. I could go on for each of these guys, because just working for KMPX at this point in time made them all radio legends.

The last piece of the KMPX puzzle is the name of the DJ in the tape. You’d think that would be easy, but it’s still eluding me. I sent a scoped (just the DJ) version of the tape to both Rachael Donahue and . Neither of them recognized the rather distinctive voice. I'll keep looking.