The Birth of Progressive Radio, and My Small Part In It

Back in 1967, I was 10 years old, and my family and I lived in , just south of SF on the coast. My dad was a bit of a stereophile, and one day he announced that he had found this incredible new station that was playing cool music. On a Saturday evening, he pulled out the big unwieldy reel-to-reel tape recorder, put the microphone in front of the speaker, told us all to shut up, and recorded two hours of KMPX.
What a great collection of stuff! Imagine a radio station today playing the following songs:
along with traffic reports ("be sure to turn on your lights -- the freeway is a fright") and discussion of the previous night's Shankar concert.
That damn tape was my dad's "party tape" for years. I thought we had lost it long ago, but I recently found the first hour, cleaned it up and made an MP3 of it. You can download it from:
http://www.scottpcook/kmpx/kmpx.mp3

Listening to it, I got a little obsessed with it. It really is a piece of history, recorded at the very moment when radio, and most of society, was poised to head off in many weird directions. So, lacking any other hobbies, I decided to research it.
First, some history. In the early 60s, the top-40 powerhouse in SF was KYA, 1260AM, with the legendary Johnny “The Teen Queen’s Dream” Holliday, Russ “The Moose” , and Emperor Gene Nelson. One of my fondest memories of my youth was spending the night in my tent in the backyard, with my little transistor tuned to KYA at my side, and hearing, for the first time, "Eleanor Rigby," Paperback Writer," and "Paint It Black," one right after the other, in an orgy of brilliance. My brain hasn't been the same since.

The station he found was KMPX 106.9 FM, which at the time did mostly Italian and Portuguese language programs for the large immigrant fishing population in . (People nowadays don’t think of SF as a blue-collar kind of town, but remember that Joe DiMaggio was a fisherman’s son from SF). The station was struggling, as were all FM stations at the time – most people didn’t have an FM receiver, despite the fact that the format had been around since the 1940s. (My family were the first on the block to have an FM receiver in 1966, and I didn’t have one in my car until 1978.) In fact, KMPX was so struggling that the phone had been disconnected, but Tom managed to negotiate a deal whereby the owner let him have the 8 to midnight slot to play whatever music caught his fancy. Tom went on the air on April 1967.
This concept later became known as “underground radio” or “rock radio” or “FM rock,” and to give credit where credit is due, Tom was not the first weird DJ at KMPX – a few months earlier, a Detroit DJ named Larry Miller started his own free-form show from midnight to 6 AM on KMPX. Between the two of them, they reinvented radio. Within a year, KMPX was “the stereo voice of ,” and the voice of a weird new generation.
My first question to research was the date of the recording. The DJ gives a few clues:
I figured the traffic reference must refer to the Memorial Day weekend (remember those damn Memorial Day traffic body counts?), and I browsed around at some vintage concert poster sites until I found the Shankar concert. The tape was made between 5:20PM and 6:17PM on .
And in the course of my research, I found this photo: the KMPX staff, circa 1967. 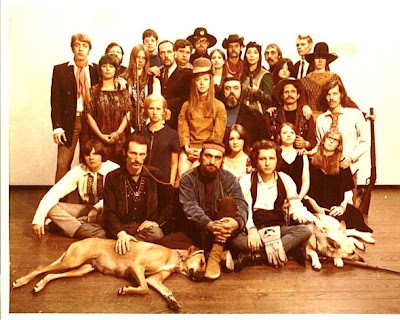 Look closely at this picture. (People tend to forget that major components of the SF style in ’67 were Western outfits and big friggin’ guns.) First that’s Howard Hesseman – yes, the Howard Hesseman, who 11 years later became immortal as “Dr. Johnny Fever” on WKRP in Cincinnati, the coolest TV sitcom ever made, standing at upper left next to his wife. Next to Mrs. Hesseman is , who is still in the biz and now serves as a DJ for Classic Vinyl, live from the Rock and Roll Hall of Fame, for SiriusXM. Three over from Dusty is Carl Gottlieb, DJ name “Egg,” who later went on to take Peter Benchley’s shitty shark novel and turn it into Jaws. (He wrote the script, and played the newspaper editor in the film.) Larry Miller is the odd little fellow in the Prince Valiant haircut in the right rear, next to some arch blond salesman who happened to wander into the lobby when the picture was taken.
Seated in the middle is Tom Donahue, in his new counterculture beard, with his child bride Raechel in the derby on his lap. Tom, alas, died in 1975, but Raechel has been in radio ever since, and until recently held Dusty Street's current job at the Rock and Roll Hall of Fame.
Tom also innovated in hiring mostly women to serve as the radio technicians and engineers, and a lot of them stayed in the business also.
I could go on about each of the people in this picture, because just by being at KMPX in 1967, they all became radio legends. (And I’d *love* to know who that psychotic looking blonde next to Rachael is.)
But back to the tape. What to say about the music? In addition to the above songs, the hour also included a bluesy version of "The Twelfth of Never" by Lou Rawls, an unknown piece by jazzman Jonah Jones, a Guaraldi-like version of "A Hard Day's Night," "Uskudar" by Herbie Mann, "Another Girl" by the Beatles, "Egyptian Garden" by Kaleidoscope, and (an especially cool find) "Miserlou" by the Devil's Anvil, a kick-ass proto-punk band supposedly from the Middle East (but actually from Brooklyn). Counting the first bar of "River Deep Mountain High" by Tina Turner that ends the tape, that's 19 songs in 57 minutes, an astounding amount of music. Of course, there are no commercials , despite the fact the X was definitely a commercial station. Still don't know what the story is there.
The only thing that still bugs me about the tape is the name of the DJ. I think that was my dad's favorite part of the tape, actually, because he thought the guy sounded like Pat Paulsen. I distinctly remember that in the now-lost second hour of the tape, he said his name was Vince Something-or-other, but I can't find any record of a Vince at KMPX. I sent a scoped copy of the file to Raechel Donahue, Dusty Street, Larry Miller (who is now a faculty member at the Art Institute International in Boston) and the Bay Area Radio Museum, and no one recognized who the laid back Saturday afternoon DJ’s voice. I also sent the file to the master of cool, Gene Sculatti, but I haven’t heard back from him yet.
I’ll keep researching. Enjoy the file.
Posted by Cardinal Fang! at 2/28/2009 08:16:00 PM

Hey...really apreciate you mentioning me in your blog...nice to go back and recall those great days at KYA.

Sadly, the mp3 link is dead.

Fixed the link. And notice the first comment - from Johnny Holliday himself! Cool beyond belief.